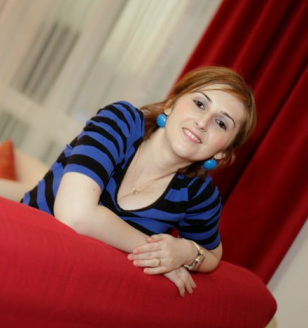 My name is Ramona, I am 30 years old, I’m from Romania and I have been living in Dubai for 7 years.
I was diagnosed with Coeliac disease in February 2011.

The diagnosis itself was quite “a ride”: I have had anemia pretty much all my life. I have been to a couple of doctors in Romania and I’ve been popping up pills on and off, but I have never taken it too seriously. Many women have anemia and it is considered a very normal thing, nothing to take too seriously…at least in Romania they don’t. :-).

However, my symptoms became a little more aggressive at the end of last year, with hair loss, serious lack of concentration, very poor sleep for consecutive months, etc. At the same time, my husband and I have decided to start trying for a baby, so I thought it might be wise to go for a check-up just to make sure things are ok.

Three different specialists were involved until the Coeliac diagnosis was confirmed. The general practitioner referred me to the Hematology Specialist after 1 month of Iron tablets didn’t show any improvement. During the first visit to the Hematologist, I have heard for the first time that “we have to find the cause of your iron deficiency anemia”. I didn’t know that there could be a specific cause to anemia till then. In the meantime, I have had two sessions of Iron IV, not a very exciting activity, let me tell you that. 🙂 The TTG results came in 2 weeks: Coeliac disease. Doctor told me not to worry, he said, …and I quote: “Don’t worry, it’s nothing major, you might just have to change your diet a little”. NOTE: “might” and “a little”. Now I find it ridiculously funny when I think about it.

I went straight home and “googled” Coeliac. First thing I saw: no bread and no cakes…LOL

You see, I’ve always been a “big” eater. Not physically big, I mean I could never keep a diet and I would eat whatever I wanted whenever I wanted. Cakes and pastries: MY FAVORITES!  🙂 The confirmed diagnosis came in Feb,  from Gastroenterology, after the endoscopy procedure. I went for a second opinion (this doctor actually told me there is no point in keeping the GF diet….I KNOW, right?? 🙂 while the third one confirmed the first diagnosis.

I started the diet late Feb 2011. I have learned everything I know today from Doctor Internet. Sometimes I wonder how would a Coeliac survive nowadays without the Internet?? One article I was reading recently said:” Nature really played a trick on Coeliacs, since 85% of products we eat daily contain gluten!”. Boy, they were right. Gluten is crazzzyyyyyyyyyy, it’s everywhere!! I truly believe that all the Coeliacs out there can become specialist dietitians in GF diet, since you have to do a massive research to make sure you stay away from gluten. Three months later my “score” (that’s how I like to call it, dropped from >100 to a whopping 15!!. Iron deficiency anemia: SOLVED, iron levels are very good. Few noticeable improvements: no more hair loss or nails breaking, more energy, better sleep. Next check-up is in 6 months, I have to score below 10 at TTG.

My biggest concern after being diagnosed is how will this affect my pregnancy plans. One doctor said to wait for one year, one said no need to wait, “Internet” says 2-3 years till your intestine recovers, else there can be a major risk for the baby, like autism, physical disabilities, etc etc. Which one should I listen to now?

Apart from this, there are of course the other thoughts, like will I get any other health complications due to Coeliac? If you go online, they list a whole things you can get.  Not to mention the infertility issue

At the same time, I constantly worry about whether I still eat gluten or not, unknowingly. I probably should have mentioned that I have no idea when I eat gluten. I can eat a whole wheat bread right now and still go to bed peacefully, no symptoms at all 🙂 While I am following the diet strictly, I can’t deny that this is constantly on my mind.

Then there are the other minor/major inconveniences: a life full of restrictions in terms of food, a lot of cooking (I don’t like cooking and I’m very bad at it. The second one is probably a consequence to the first one. Not to mention that your social life gets punched in its face: you have very limited options to eat out, so you either drag your friends to the same places every time (by apologizing 100 times every single time) orrrrrrrrrrrr you skip the outing. 🙂 Sometimes I find the second one easier.

Then there is THE “explanation” every time you eat in a new place. I know lying is bad, but it sure comes in handy sometimes :-P. I always say I have an allergy and I stop breathing if I eat gluten. Sorry, but people take it more seriously this way!

Last, but not least, the limited options in Dubai. You have to shop to 4-5 different places each week and only a couple of restaurant actually know what GF is. The others…you have to teach. It can be frustrating when you read about other countries and the fact that your life would be much easier there…you kind of feel like moving…

For all the reasons above, I am extremely grateful to this initiative and the person behind it. 🙂 This is how I got to meet other Coeliacs, share my experience and most importantly found out about the GF pizza in Lulu’s. LOL 😛

The reality is that you will start getting used to it. I’m still not there yet, I mean mentally, I have not accepted it completely that this is how my life will be from now onwards, I gave myself one year for that. :-). Because apart from the strict diet, I strongly believe that Coeliac affects you psychologically, as well. It will take you sometime to accept it. My friend was asking me the other day:”you, of all people, how can you do this? You don’t feel tempted now and then”?. Honestly, I have never felt tempted ever since I’ve started the diet. Not even once. Yes, I do crave for a couple of things now and then when I see people eating in front of me, but I’ve never once thought of cheating. Who am I gonna cheat after all…but me???

Living with Coeliac is not just following a diet I believe, it becomes a way of life. A life full of discipline, planning, probably a healthier one too, since junk food is out of the picture. BUT, like one of the doctors told me:”If you were to choose one autoimmune disorder, this is the best one to choose”. :-))) So instead of dwelling on what “you can’t eat”, try focusing on “what you CAN eat”, and always remember…it could have been much worse than this. Soooooooo, a big KUDOS to all the Coeliacs out there and hopefully we’ll see some major improvements in the UAE in the years to come. 🙂